My photograph inspired a quilt

They say imitation is the sincerest form of flattery – this story fits the bill.

A few years ago while on assignment for Via magazine, I captured an image of Lombard Street that ran in their July/August 2009 issue.  I was happy with the shot but didn’t feel it was the best image I captured that day, but that’s never the point when you are on assignment – the key is if your editors are pleased with the results – what they use is up to them.  I even had another editor (from a different magazine) comment on how they felt this was one of the best images of Lombard Street he had ever seen.  Goes to show you how subjective art can be.
A month later landscape quilter Susan Lane contacted me to ask permission to use this image as inspiration for a new quilt she was sewing, to hopefully show in an exhibit.  She said she was inspired by the iconic nature of this image.  Since she wasn’t creating the quilt as a product to sell or license, I granted her permission and a few months later she emailed me the results.

Susan made the 27” x 52” quilt using various methods including fused and raw-edge applique, painting and texture magic, taking over 2,000 hours to complete the piece.  She was kind enough to offer to meet so I could see the finished piece, but we never found a time to work for both of us.  You can see more detail of the quilt by visiting (and scrolling down): http://maverickquilts.wordpress.com/tag/susan-lane/
Susan’s “Lombard Street” piece appeared in numerous shows including the Pacific International Quilt Festival in 2010, and in 2012, it was accepted into The West Coast Wonders, to show at International Quilt Festival in Long Beach CA and Houston TX.  The quilt also won “Best of Show” in 2011 at the Carquinez Straits Quilt Guild show.  For more on Susan’s work, visit: http://www.mysticstitchery.com/index.html

So many have inspired me in my artistic career, it’s nice to inspire another artist. 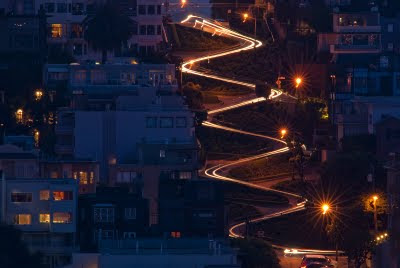