A fellow photographer and colleague recently posted this link on his Facebook page and it caught my eye.  A Dad and his daughter were recently rescued in Yosemite when they got trapped in this dangerous valley I once photographed – check out the article to read more: http://www.nps.gov/yose/blogs/Stranded-Hikers-Rescued-from-Tenaya-Canyon.htm
When in nature, one wrong decision can turn into an ordeal, a lot of extra work, stress and exhaustion, or worse- severe injury or death.

What caught my attention was the location of where these hikers were rescued from – Tenaya Canyon.  Tenaya Canyon is an area just East of Yosemite Valley, slightly rising above and gradually continuing up toward Tenaya Lake in a series of steep climbs, thousands of feet below Half Dome, Cloud’s Rest, and Mount Watkins.  It’s the one area on the topographical maps of Yosemite and the Sierra labeled “Hiking in Tenaya Canyon is dangerous and not recommended”; and it’s one of the spots my brother and I found ourselves in one long backpacking weekend.

Here are a few shots of Tenaya Canyon from different vantage points:


Below: Two views of Tenaya Canyon from Cloud’s Rest, 5000 feet above – the first, a panorama of the canyon, and the second of the last section near Yosemite Valley (at bottom right) 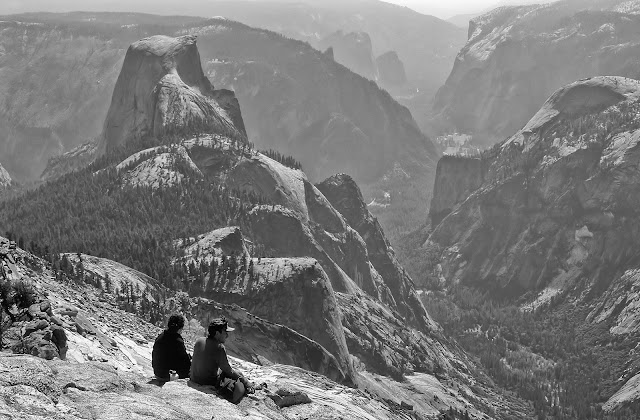 Below: Two sunset/ dusk views of Tenaya Canyon below Half Dome from Olmsted Point 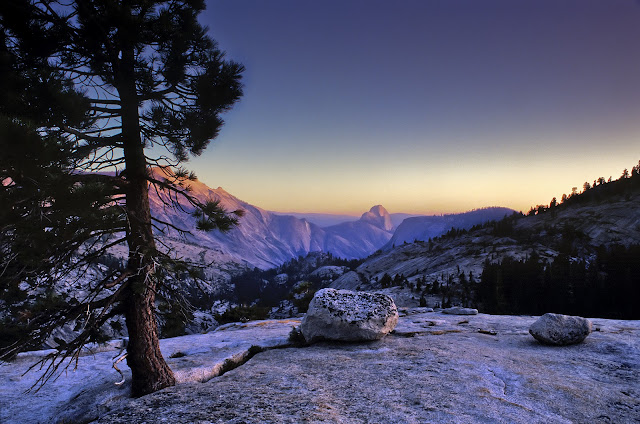 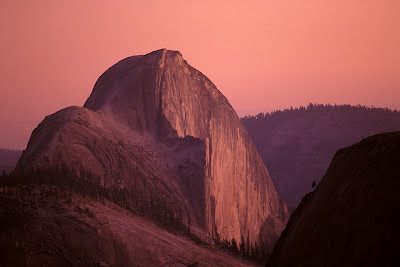 Below: A glacier carved Tenaya Canyon carving through the Sierra toward Half Dome (the black & white in morning light, and the color version at sunset) as seen from Mount Watkins (smoke from a distant forest fire rolls overhead) 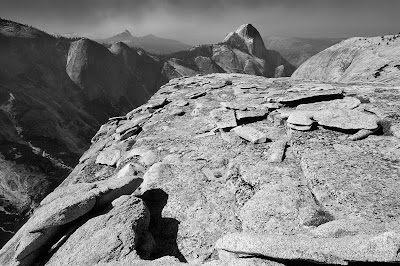 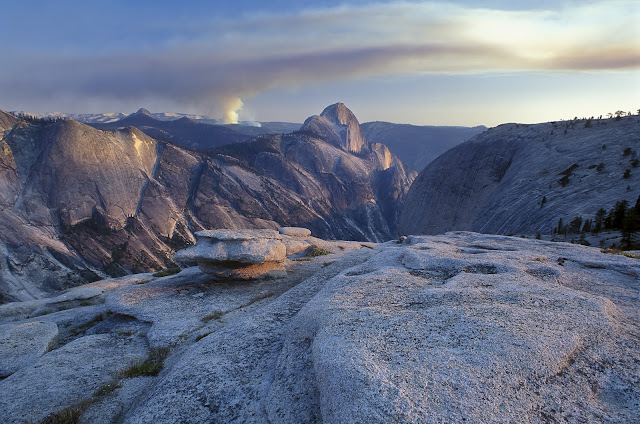 John Muir wrote about this area in his story “A Geologist’s Winter Walk“, hiking up the canyon from Mirror Lake.  He writes I thought, a fast and a storm and a difficult canyon were just the medicine I needed.  It’s a good read as is any of his jaunts into the mountains.  In Muir’s words (which I edited down a bit), This canyon is accessible only to mountaineers…After I had passed the tall groves…and scrambled around the Tenaya Fall…ascending a precipitous rock front, smoothed by glacial action, when I suddenly fell — for the first time since I touched foot to Sierra rocks. After several somersaults, I became insensible from the shock, and when consciousness returned I found myself wedged among short, stiff bushes, trembling as if cold, not injured in the slightest.  Judging by the sun, I could not have been insensible very long; probably not a minute, possibly an hour; and I could not remember what made me fall, or where I had fallen from; but I saw that if I had rolled a little further, my mountain climbing would have been finished, for just beyond the bushes the canyon wall steepened and I might have fallen to the bottom.

And then he writes a line I just love, and one that has become our silly mantra in the outdoors (and in other venues of life) was one he wrote after falling and knocking himself unconscious navigating the treacherous narrow canyon.

I felt degraded and worthless.

As in classic Muir fashion, he made it up through the canyon and returned to Yosemite Valley a few days later via a safer route.


By cool efforts, along glassy, ice-worn slopes, I reached the upper end in a little over a day, but was compelled to pass the second night in the gorge…I escaped from the gorge about noon, after accomplishing some of the most delicate feats of mountaineering I ever attempted.

I hadn’t read this account of the canyon before my brother and I took our August trip, but I wished I had.  We headed off on a three-day backpacking trip, not completely planned out, starting with a 7.2 mile trek up to Cloud’s Rest from Tenaya Lake.  We were either going to camp at Cloud’s Rest and return the next day, or spend another day out there somewhere – either heading to the valley or to another high country location.  Not growing up together, it was our first backcountry trip as brothers, so it was special.

Here are a few images I documented along our three-day journey.  The first (below) is a sea of smooth granite curved into a bowl-shaped depression as if from a cirque glacier, captured just down from the Cloud’s Rest trail in an area known as the First Rock Bowl.  This was after we spent a night atop 9,930 foot summit of Cloud’s Rest.  Heading back toward Lake Tenaya, we veered off the trail and cross-country hiked to get here, no designated trail leading us. 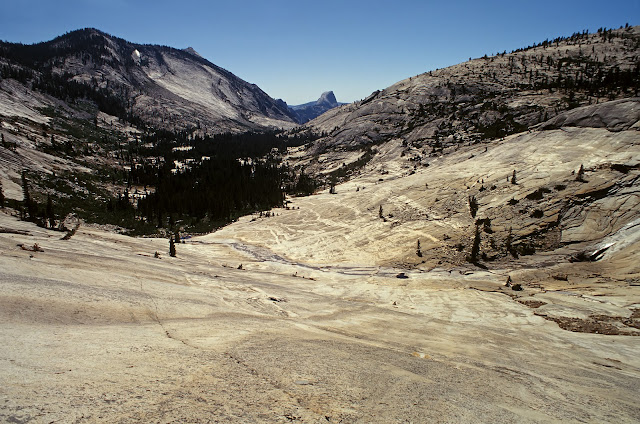 It was a magical spot – Tenaya Creek trickling through various bowls of water we sat next to.  We plan on heading back here in the next month or so – it’s been too long. 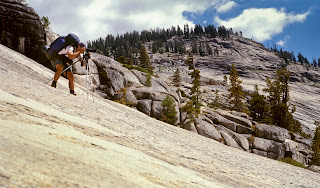 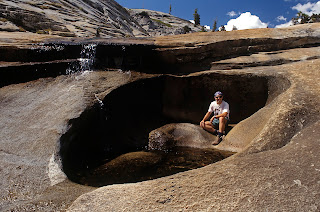 At this point, we decided to head toward Yosemite Valley somehow. I had some knowledge Tenaya Canyon didn’t have a trail leading to the valley, so we headed West.

This fourth image was shot as we head over a ridge cross-country from the First Rock Bowl to a dry creek bed just south of Olmsted Point.  Familiar with my surroundings, I had an idea where we were going, but without a more detailed topo map (mine covered the general area), I didn’t know if we’d hit a trail that would lead us to the valley. 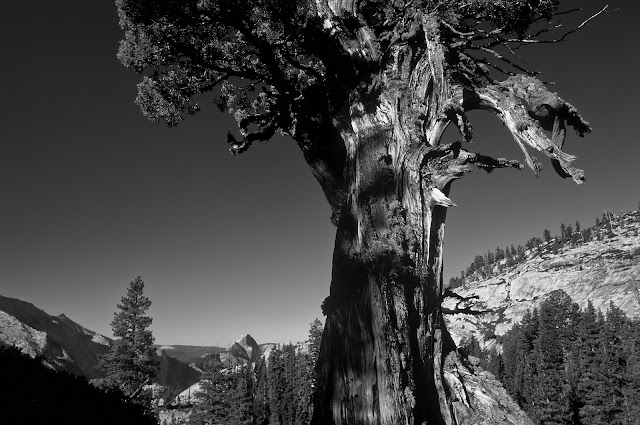 This second day grew long and after climbing up and down a few ridges, we came to a dry creek and followed it to the edge overlooking Tenaya Canyon and across to Half Dome, Quarter Domes, and where we started our day on Cloud’s Rest.  It was a great view but we knew we couldn’t enjoy it for too long because we had to make a decision.  Filled with an adventurous spirit, my brother wanted to head down into the rugged dry river bed, packed thick with granite boulders.  But it looked steep and was the unknown.  I had a bit more backpacking experience and felt uneasy with this choice, but after some discussion of our options agreed with the route.  I told him if we reached any places we felt were points of no return (such as a place were we might be able to get down, but not back up), then we’d turn back.  My fear was we couldn’t see the entire route down, and if it appeared more hazardous than we thought, without ropes or any rock climbing experience, it could be extremely dangerous.  We were also very low on water and expected this river to be one of our fill-up spots.

The rest of the afternoon was spent maneuvering through the boulder-ridden dry river bed, passing our backpacks down to each other as to be as balanced and safe as possible.  We even past an airplane engine, crumbled and rusted from a crash in 1958.  Soon the sun set and it grew too dark and dangerous to continue- even with headlamps.  We had to settle in for the night, in a cramped sandy area too small to even set up our two-man tent.  From this vantage point, we could see Pywiack Cascade flowing 600 feet over a granite lip into Lost Valley.  The base looked to be only a couple of hundred feet down it, maybe 15-20 minute away, but we weren’t even sure we could get there.  We were tempted to continue just for the mere fact our water bottles were now empty.  Without any water for dinner, we ate what food we could and crashed for the night, our throats parched and our spirits a bit dampened.

Daybreak couldn’t come any sooner.  As soon as the first light gave us enough to see, we packed up and continued our scramble down toward the pool of water at the base of the waterfall.  All we had were potable water pills, and the ten minute wait to purify the water was torturous.  When you run out of water and you’re thirsty, boy you appreciate it all the more.  At this point there was still some descent but the valley widened and flattened out, and I was a bit relieved. 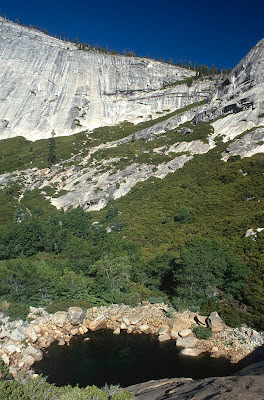 Here we stood near the bottom of Pywiack Cascade that morning, deep in Tenaya Canyon looking toward Half Dome at the start of Lost Valley (below).  The image above looking at the Pywiack’s pool and the ridge high up from where we came- little did we know what was ahead. 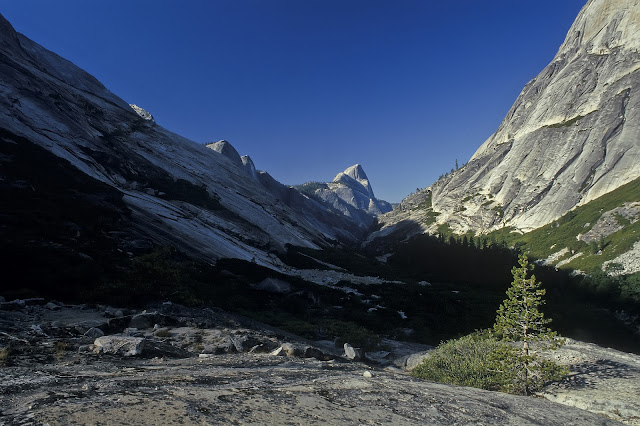 We played around a bit, then followed Tenaya Creek from the waterfall down into the V-shaped valley, and soon most of the creek seemed to sneak underground as the river bed turned mostly dry, which made it a bit easier to hike through instead of the thick foliage on each side.  Piles of bear scat dotted the valley, a bit unnerving since I knew these bears were probably from Yosemite Valley and less nervous to approach people.  I also had a feeling this rocky dry river bed was the calm before the storm.  I kept saying to myself, this looks easy but where ever this creek comes out, I have a feeling it might not be a good place for us.

Sure enough after a few hours zig-zagging through the rock bed, we came to a sandy area, and just beyond a few large granite boulders (most likely glacier erratics) we came to a place I call “The Gorge of Death”.  A steep drop-off where Tenaya Creek burst out and down into an overhanging gorge, unnavigable without serious climbing experience.  Any hopes of getting to Yosemite Valley, which felt all too close, were dashed.  It was Sunday mid-day and knew we had to decide what to do, but it wasn’t much of a decision – the only option was to hike back to our car at Tenaya Lake, miles away and thousands of feet above.  As we made our way back, a creek bed to our right looked easier and more inviting, but we decided against it, figuring the route we came down was the one we knew best – it was doable and predictable albeit hard.


Below: Retracing our steps back up Tenaya Canyon through the relatively dry Tenaya Creek 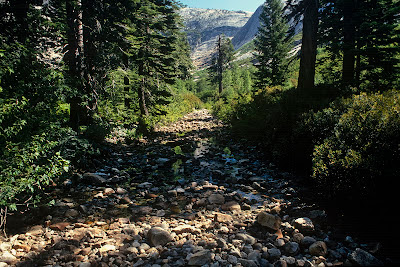 So we spent the rest of the day retracing our steps, filling our bottles at the bottom of Pywiack Cascade, and after a long hike up a few thousand feet in elevation gain, scrambling up the dry river bed, and over a number of false summits, we finally made it back to Olmsted Point – almost out of water again, beat, yet a bit relieved to have no major incidents.  Ahhhhh.  Off with my backpack, remove the boots and socks, guzzle down a gallon of water, smile, hitchhike back to our car in Yosemite Valley, and drive on home.

I don’t know if I’ll ever return to Lost Valley – maybe above it where it’s safer and more accessible, but not all the way down into Tenaya Canyon.  It was an adventure, but one that could have easily turned bad.  With a little luck, being extremely careful when my inner voice was telling me to heed the warnings, we had a special memory instead of a nightmare.


Below: A ridge above Olmsted Point at dusk 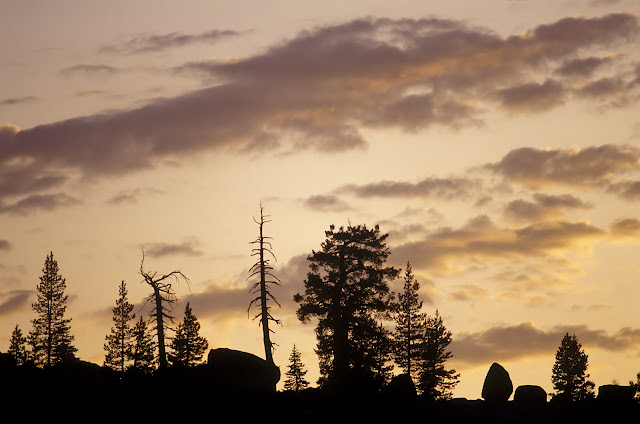